I will be showing some panoramic images in this large group exhibition. I am excited to have my first exhibition of prints in Japan – after many years shooting the Japanese cItyscape.

I will also participate in a BAPC group exhibition, Places Of Change that will be part of this event. The larger exhibition is called Making of a Beautiful Bridge and is organized by SAMURAI FOTO which is a member-based photo collective that is partnering with BAPC.

Other participants from  SAMURAI FOTO include Yoshida Shigeru, Everett Brown and many others.

Making of a Beautiful Bridge is part of the annual Photo Yokohama Festival in Yokohama, Japan. Up to 40,000 people attend for this week of exhibitions, conferences and other events.

I was also in this group exhibition “Places of Change”

Please join me at the “Sukkah Studio” in the lobby of the Contemporary Jewish Museum on Monday, October 9th from 11am-5pm. I will be the visiting artist for the day showing my work and teaching visitors how to take panoramic photos–and how to think about the unique aspects of the panoramic format.

Sukkot is the week-long Jewish harvest festival—the museum is re-inventing the idea of the Sukkah as a place for artists. From October 5-10, one artist will inhabit the Sukkah Studio each day.

Visiting the Sukkah Studio is free; you can find it in the Museum lobby common area.

As a participating photographer of Photolucida, I will be included in the Portfolio Walk on the Thursday evening of the Reviews at the Portland Art Museum. Each photographer will have a table to display their prints and materials. The three-hour event is split into three sessions. Photographers are each given one hour to display their work.

This is a very busy and crowded event, free and open to the public.

See more photography in one night than most people see in a lifetime! The Portfolio Walk is a showcase of all the artists participating in Photolucida’s Portfolio Review event. Over the course of the evening, 160 photographers from all over the country and world will display their portfolios for all to see. The photographers are talented contemporary artists with fresh new voices. It’s a great chance to see modern photography at its finest. Meet the artists, see the prints, ask questions, get inspired!

The big yearly art sale at the SFMOMA Artists Gallery:

SFMOMA members receive discounts on original art up to 50% off! Proceeds benefit the participating artists, the Artists Gallery, and SFMOMA’s exhibitions and education programs.

I’ll have one Interface image addressing the theme of repetition at Pro Arts gallery starting Jan 6 2017. 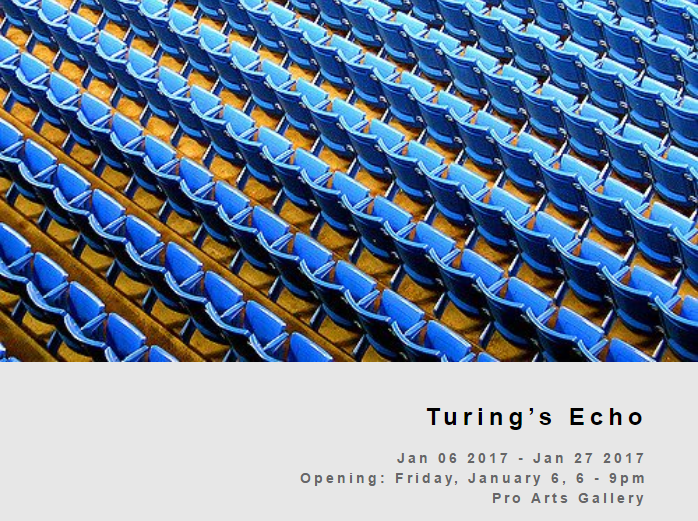 During the Post-WWII era, repetition became a tool in art as both a commentary and critique of a changing society. From the serial works of Pop artists and the manufacturing techniques of many Minimalists, the prevalence of repeated forms and images directly responded to ideas of authenticity and ownership. In our current social, economic, and political climate, many are concerned that we are doomed to repeat past mistakes: be it the resurgence of Nationalism, segregation, authoritarian governments, or environmental disasters. In this context, we are excited to present a range of artists who are inspired by this contemporary context.

Looking forward to meeting you there.

How the Light Gets In: Bay Area Photo @ SFMOMA Artists Gallery

I’ll have two large pieces in this group show. Come bathe in the light of 4’x6′ light boxes.

and Gordon’s shot of me placing art in a lightbox….

and a mention in artbusiness.com